I know, I know, I am getting there but I just wanted to touch on one more thing before I continue on our journey of exploring our open adoption. I don’t know if I was more hurt (and mad, no, not just mad, I was pissed) by losing Julianna or losing the idea of becoming a family of four. But whatever one it was, it changed me, it changed us.

If I haven’t mentioned it before, we sold our house back in March. There were a few reasons in selling, one of which was we wanted Jackson to go to school district where my husband works. After our house sold we had a decision to make, did we want to continue in the adoption program? After our adoption failed, we just opted to do nothing. It was too painful and too quick to make any decision. Basically our options were to do nothing (which is what we did), still be part of the infant/domestic adoption group, or change programs.

After we sold our house and moved we would have to choose if we wanted our new house to have a home study and be “approved” for an adoption. If we said yes, approve this house, it would mean we were going to adopt another child, if we said no, we were withdrawing from the program. After many long discussions and prayerful consideration, we withdrew from the program. For the first time since starting the adoption process back in 2009 we were not under the microscope of the State of Wisconsin and it feels great!  We don’t have to have a fire escape plan on our refrigerator, we don’t have to have all of our outlets plugged, we don’t have to have an endless list of requirements met to raise our child, we simply just get to be Jackson’s parents.

Which brings me to my next point. It has become relatively clear to us that there is a really good chance we are only going to have one child, Jackson. 1, because I do not want to deal with another birthmom (and I say that in the nicest way possible and mean absolutely no disrespect to Heather; 2, because it would be a medical miracle to get pregnant on our own and; 3, I am not going to put myself, JJ or Jackson through the agonizing pain of using artificial insemination again.

I will say this with 100% confidence I don’t see it as a loss only having Jackson, I see it as I have gained the world. So, don’t say, I am sorry, or don’t say that it’s too bad, or don’t say you make such a good mom, you need to have more children, say that you appreciate our openness, our truths, our wisdom, and our family of THREE, period.the.end.of.it!!!

Next, I will get back on track sharing with you all when we saw Heather again, which happens to be the day we dedicated Jackson to raising him up to know Jesus!  Until then, enjoy your story, share your story, and remember everyone has a story you know nothing about! 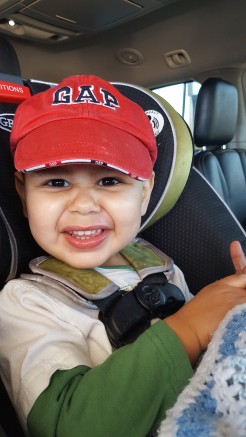 That is ONE happy boy and one happy family!!!!